Delphi XE2 - A few of my favourite things...

If you follow Delphi at all, then you will have noticed lots of recent activity around the upcoming release of Delphi (Rad Studio) XE2.  And with big ticket items like native 64 bit, Mac and iOS support, FireMonkey, VCL themes, data binding (VCL and FireMonkey), etc, there is a lot to be excited about.  I find myself looking for opportunities to use some of these new features.

However, and with Embarcadero's permission, I'd like to point out a couple of features that don't necessarily get as much press, but are immediately useful to me.

I've been a fan of dbExpress since it was introduced, but the biggest drawback has always been that you need a driver for the specific database you want to use.  Otherwise, you're out of luck.  XE2 (finally) helps fill in the gaps by adding ODBC support for dbExpress.

DataSnap (formerly Midas) has been around since Delphi 3, but (IMHO) really became useful when it was overhauled in Delphi 2009 and later with features such as being decoupled from COM, adding filters for encryption and compression, REST support, etc.  If pressed, you could argue that DataSnap supported SSL, but this was only when used through IIS, which is a bit of a cop out (again, IMHO).  In XE2, you can build stand alone DataSnap servers that support HTTPS. 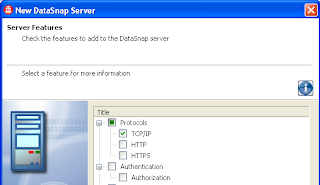 If you want to learn more, Embarcadero is currently on a World Tour (initially 70 stops in 30 countries, and more stops are being added), Delphi Live starts September 12th and CodeRage 6 starts October 17.

The Toronto stop for the World Tour is Wednesday, August 31 at the North York Regional Library.  Note that it starts at 6:00 PM instead of 7:00 PM, like the user group meetings.  If you will be attending, please register online so they can plan accordingly.
Posted by Bruce McGee at 12:26 AM

Good ones. I love the new platform-information "TOSInformation" and I love love love the fact that Resource files no longer need to be checked into version control.... remember that annoying message box when a .res file is recreated from blank defaults?
New projects (.dpr or .dpk + dproj) also gets a resource script RC file (plain text! hooray!) and an ico file (binary but unlikely to be a source of binary merge conflicts).